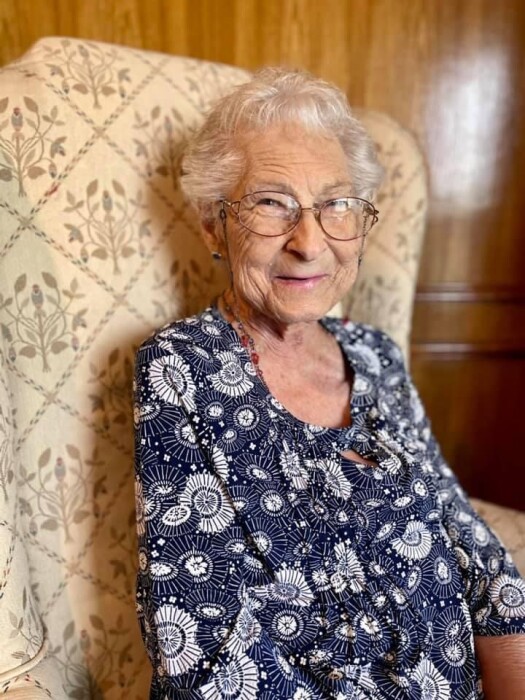 
Vivan Jones, age 87, of Celeste, Texas, passed away on Feb 20, 2022.  She is now with the loves of her life: husband of 44 years, Jim, her daughter Rhonda, and both of her parents.
Vivian was born in Wichita Falls, Texas.  She was the oldest child of John and Alta Mitchel.  She had 6 sisters and 2 brothers.
Vivian grew up during hard times in the 1940's.  Her family would just pick up and move around a lot, and she grew up taking care of her brothers and sisters.
Vivian met her future husband Jim on a walk to the store.  He and his friend were in a car, and offered her and her friend a ride home.  They went on a blind date, and their love only grew from there!  Together they had four children:  Jamie, Ronnie, Joe, and Rhonda.
Vivian was a kind and caring person.  She is known best for taking care of everyone.  She helped raise nieces and nephews along with her own children.  She loved home cooking and quilting.
She has worn her titles well: wife, mother, grandmother, great-grandmother, and great-great-grandmother.  Family was her life.
Vivian is survived by her sons; Jamie and his wife Tammy, of Celeste; Ronnie and wife Gayla of Celeste; and Joe and wife Cindy of Campbell.  She had 5 grandchildren: Sheila, Brandy, Alicia, Falyn and Jeremy as well as 5 step-grandchildren: Rana, Zach, Brandon, Kayla, and Angie.  Her great grandchildren include Kenzi, Kendell, Mason, Silas, Kali, Rye, Josh, Blaine, Bryce, Presley and Jaisley, as well as step great-grandchildren including Payton, Zoe, Erin, Zaiden, Ethan, Caden, Madison, Colby, and Noah.  She had one great-great-granddaughter, Kaisley, who brought a smile to Vivian every time she came to visit.
We would like to thank Robert, Casey, and Sam of our hospice team from Kindred Hospice in Greenville, TX.  They made a difficult time easier for Vivian and our family.

To order memorial trees or send flowers to the family in memory of Vivian Jones, please visit our flower store.