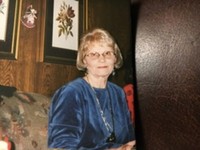 Shirley Ann (Lefevre) Southard, 82, of Hallsville, TX passed away in the comfort of her home on Saturday, September 23, 2017. She was born on February 14, 1935 to Clyde Lefevre and Ethel May (Caldwell) Lefevre in Farmersville, TX. She married Roscoe Eugene Southard on October 27, 1951.

Those who continue to cherish Shirley's memories are: her daughter and best friend, Karen Arnold and her husband Robert; son, Randy Southard and wife Jeanne; 16 grandchildren, 14 great grandchildren, six nieces, and two nephews; her sisters, Nelda Hauerwas, Billie Foy Stimmel, Pat Brown, and Betty Dotson. Shirley is preceded in death by: her parents, Clyde Lefever and Ethel May (Caldwell) Lefever; those who raised her, John and Ada Caldwell; her husband, Roscoe Eugene Southard, and her grandson, Cody Johnson.

To order memorial trees or send flowers to the family in memory of Shirley Southard, please visit our flower store.