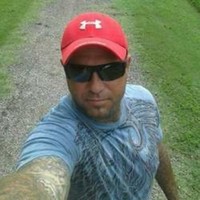 Richard "Rick" Lee Boyd Jr. passed away peacefully in his home in Greenville, surrounded by those who love him, on Friday, September 22, 2017. Rick was born on June 3, 1968 to his parents, Richard Reece Boyd and Sharon Jean (Lyon) Boyd. He married Tracy (Gordon) Boyd on May 27, 2016, in Greenville, where they continued to love and cherish one another until his passing.

Rick will be remembered as always putting the needs of others before himself. He was a caring individual who was always willing to lend a helping hand. His love for welding and fishing were an important part of who he was. Rick was known to always jump at an opportunity to celebrate anything. Rick met his wife, Tracy, while they were both working at the Salvation Army, lending their helping hands to others.

Rick's family will be hosting their own service in his honor at a later date.

To order memorial trees or send flowers to the family in memory of Richard Boyd Jr., please visit our flower store.