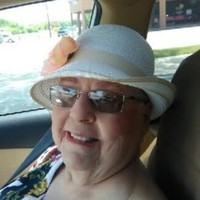 Rebecca Ann Richards passed away Wednesday morning June 20, 2018, peacefully in her daughter's arms at the age of 77. Rebecca was born in Gainesville on November 10, 1940 the daughter of Elmo Walker and Evelyn Laverne Goree. She graduated from Greenville High School in 1958. Rebecca married her husband of 58 years, Johnny Fred Richards, Jr., December 25, 1958 in Hugo, Oklahoma. He preceded her in death on May 29, 2016. Rebecca worked for Southwestern Bell until her retirement. Prior to her retirement she worked hard to help support her family and was a great example of strength for her husband and children. Rebecca loved animals. She raised German Shepherds and shared in her husband's love of raising horses on their farm prior to her husband's passing. Rebecca loved to spend time with her children, grandchildren and great grandchildren.

A memorial service will be held on Saturday, June 30, 2018 at 11:00 AM, at Peters Funeral Home Chapel in Greenville, TX. One hour prior to the service, the family will host a time for sharing memories and visitation.

To order memorial trees or send flowers to the family in memory of Rebecca Richards, please visit our flower store.