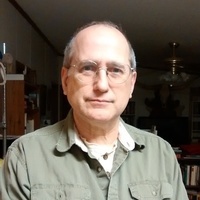 Patrick Michael Rodgers (born on December 7th, 1954 to Louis Raymond Rodgers and Norma Jean Martin in Dallas, TX) passed away on January 8th, 2020. He is survived by his wife Cynthia G. Rodgers after 46 years of marriage, his daughter Carissa E. Rodgers, his grandchildren Abigail, Joshua, and Caleb Slate, and his 2 brothers Daniel and Quinton Rodgers. Mike and Cindy have been long term residents of Quinlan, TX.

Mike joined the Navy and was stationed in Guam at the end of the Vietnam War, working as a radioman and also traveled the world by boat and submarine.

Mike was an artist and computer whiz. He worked in IT for American Airlines, Saber, and Travelocity while he was also a highly respected leather carver instructor at Tandy Leather. Later in his life he worked at the local Veterinary clinic for a number of years. He enjoyed leather working, computers, art, photography, bread making, and cycling. He rode across several states by bicycle and later by motorcycle.

He will be missed greatly and remembered as a kind soul with a great sense of humor.

His remains will be placed in the wall at DFW National Cemetery as well as his step father and mother: Robert and Norma Fordyce at 10:00 am, Monday, February 17, 2020.

Dallas Fort Worth National Cemetery
To order memorial trees or send flowers to the family in memory of Patrick Rodgers, please visit our flower store.