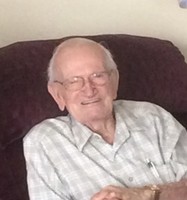 Merle Nowlin, 87, of Greenville, passed away on Friday, January 13, 2017 in Greenville, Texas. Mr. Nowlin was born to Raymond Thomas and Nettie Lorie (Little) Nowlin on August 15, 1929 in Mt. Vernon. Merle married Ida Weige on June 1, 1958 in Las Vegas, Nevada. Ida preceded him in death on September 22, 1981. Mr. Nowlin served in the United States Army during the Korean Conflict, he worked in real estate in Portersville, Cailfornia for several years before moving to Texas and retiring from Golden Key Real Estate in Greenville. Mr. Nowlin also attended Family Fellowship of Greenville.

To order memorial trees or send flowers to the family in memory of Merle Nowlin, please visit our flower store.