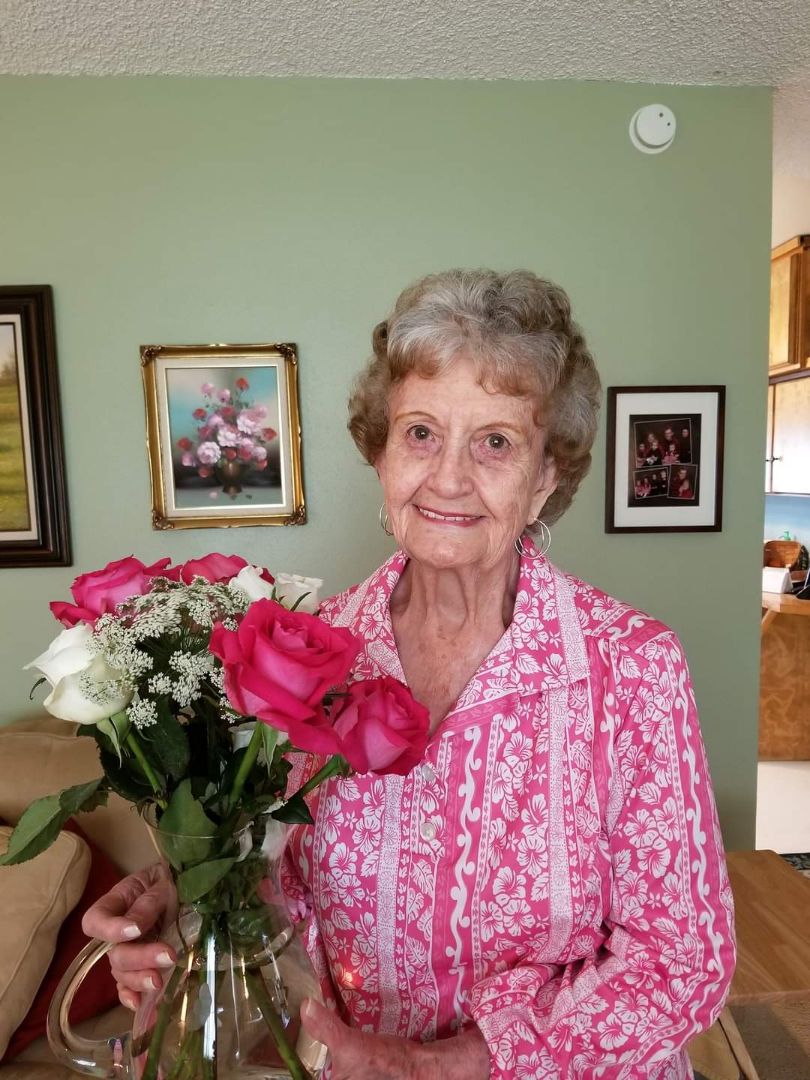 Mary Jo Juul was born in Gotebo, OK. On the family farm on January 9, 1933. She passed away in her home in Greenville, TX. on June 30, 2022, at the age of 89. When she was a girl and the oldest of her siblings, she enjoyed helping her father on the farm, milking cows, gardening and other farm chores. As a young girl she also learned to plow with a team of mules and learned to drive at a very young age. She enjoyed riding horses and spending time with her cousins and siblings. Growing up in the late 30’s and early 40’s she enjoyed the Wonder Woman comics and western movies. Later in life one of her favorite hobbies was watching the old western shows. She loved to laugh and took every opportunity to laugh. She also loved to sing. Whatever she was doing-washing dishes or walking through a room she would sing if a song came to mind. She was beautiful and loving. Her humor and smile were contagious and sometimes unexpected, but always anticipated and a joy to see and hear.

Growing up in Albuquerque, NM she attended Highland High School. She was married on December 31, 1949, at the young age of sixteen, just nine days before her 17th birthday and graduated from Highland High School in the springs of 1950. During the first several years of their marriage they lived in a variety of places in New Mexico close to Albuquerque, including Gallup, NM and Thoreau, NM. In June of 1970, with her brother Cecil Cox, they loaded six of her eight children into a camper, and moved to Anchorage, Alaska, following her husband who had gone a year before to secure a job. She raised four of her children and one grandson during her time in Alaska. After her children were on their own, she and her husband moved back to New Mexico in the fall of 1994. They lived in Bosque Farms, NM from early 1995 until the summer of 2003 when they moved to Roswell, NM. Her husband passed away the summer of 2015 and Mary Jo continued to live in her home in Roswell with her sons, Bryan and Mike until she and her sons relocated to Greenville, TX March 28, 2022.

She loved attending church as a young girl and gave her heart to the Lord at a young age. When she was very young and up until her home going, she loved the Word of God more than life itself. There was and is nothing more that she wanted than her children and grandchildren to learn and come to know Jesus the way she did and to never lose that hunger for His Word and the constant desire to be close to Him. One of her favorite scriptures is 1 Corinthians 13:1 thru the first part of verse 8, ending with “Love never fails”. Her heart longed for those she loved to know this promise that if we walked in Love towards one another that promise of “Love never fails” would be ours. No matter the circumstances Love always wins. She also loved reading Psalms 91 and that promise of dwelling in the secret place of the Most High. She knew whatever the circumstances, whoever believed in the Lord Jesus as Savior and King, by his grace and mercy we dwell in that secret place. There is nothing we can do to earn it, that place was purchased by the sacrifice of His own life and His resurrection from the dead to secure that place for all time as long as we believe and acknowledge Him as Lord and Savior. Psalms 23 was probably her lifelong favorite scripture. She knew this passage as a promise of blessing and restoration despite the circumstances. A time of no fear, but comfort in the presence of the Lord and a promise of what she has now, dwelling in the House of the Lord Forever.

Arrangements are under the direction of Peters Funeral Home, Greenville, TX.

To order memorial trees or send flowers to the family in memory of Mary Jo Juul, please visit our flower store.
Send a Sympathy Card