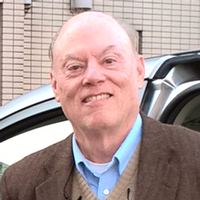 Mark Eugene Franklin, 70, of Greenville, born on September 18, 1948, in San Angelo, Texas, passed away on April 6, 2019. He is survived by his wife of 45 years, Linda; father, John B.; brothers, John B. Jr. and wife Susan, Bruce K. and wife Blanca; nephews, Randy and wife Ashley, Johnny and wife Tosha; cousin, Jon Gantenbein, and numerous other cousins, nieces, and nephews. He was preceded in death by his mother, Jean.

Mark was a Vietnam veteran, serving in the US Navy, flying with the Typhoon Trackers based on Guam. After his military service, he graduated from the University of Houston, and then earned an MSEE from Northwestern University. He worked in Chicago, Spain, and Japan as an electrical engineer, finishing his career as Systems Engineer at L-3 Communications, retiring in 2016.

He was an active member of the Creekside Church of Christ, a Sunday morning Bible class teacher, and last year, was an evangelist in Japan for three months, teaching the gospel in Japanese.

He used as his guide for serving, James 1:27, “Pure and undefiled religion before God and the Father is this: to visit orphans and widows in their trouble, and to keep oneself unspotted from the world.” He will be missed by all that knew him.

To order memorial trees or send flowers to the family in memory of Mark Franklin, please visit our flower store.