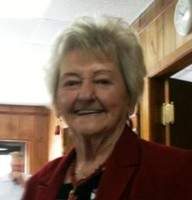 Margaret Clawson, 83, passed away on Tuesday, March 11, 2014 in Rockwall, Texas. Margaret was born February 17, 1931 to Robert and Iris Wheeler in Saltillo, Texas. Margaret would meet and later marry Bobby Clawson. To this union were born three children, Vicki, Kathy and Stephen.

Margaret worked for many years in quality control at Texas Instruments. She wore many hats and had many interests, but her greatest passion was her family and her church. Margaret loved spending time with her children, grandchildren and great-grandchildren. She was proud of her family and all their accomplishments. Margaret was also a faithful Christian devoted to her Savior and to her church. She would always witness to everyone she would meet and inviting them to her church. As ill health overcame her physically, she never complained as her faith appeared to grow stronger and spirit more at peace. Margaret was a loved member of the United Methodist Church in Caddo Mills. Her loving spirit, open heart and beautiful smile will be missed by all who knew her.

Margaret is preceded in death by her parents, Robert and Iris Wheeler; her beloved husband, Bobby Clawson and her aunt Bertha Wheeler.

Those left to celebrate her life include her son, Stephen Clawson and his wife Kathy; daughters, Vicki Palmer and her husband Jim, Kathy Wise and her husband David; grandchildren, Jeff Gandy, Jamie Branch, Cassie Gandy, Nigel Gandy, Jacob Clawson and his wife LaGina; Christi Nelson and her husband Buddy; twelve great-grandchildren; one great-great-grandchild; sister Marian Leslie; as well as, numerous extended family, friends and neighbors. Margaret will especially be missed by her church family at the United Methodist Church of Caddo Mills.

A gathering of family and friends will be held on Friday, March 14, 2014 from 6:00 to 8:00 p.m. at the funeral home. A funeral service will be held the following day, Saturday, March 15, 2014 at 10:00 a.m. at the United Methodist Church, 2500 First Street, Caddo Mills, Texas. The interment will be at Pine Forest Cemetery in Winnsboro, Texas later the same day. The family has requested that in lieu of flowers, donations be made in Margaret's memoryto the United Methodist Church of Caddo Mills, P.O.Box 417, Caddo Mills, Texas 75135.

To order memorial trees or send flowers to the family in memory of Margaret Clawson, please visit our flower store.