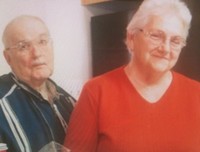 Margaret was born May 28, 1937 in Evansville Indiana to Lawrence and Clara Gentry. She was a homemaker. She was married to Richard Eugene Brittain who preceded her in death in 2010.

Margret is survived by Sons; James Brittain and Brian Brittain, and grandchildren; Ashlie Capps, Amanda Stewart, Amber Brittain, Andrew Brittain, Michael Brittain, and Matthew Brittain. She was preceded in death by her parents, daughter; Deborah Capps, and son; Steven Brittian.
To order memorial trees or send flowers to the family in memory of Margaret Brittain, please visit our flower store.