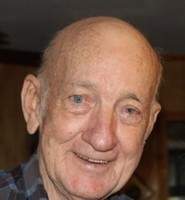 L.B. Coke passed away peacefully at his home on February 15, 2017 comforted by his loving wife, Freedia. L.B. was a member of Vansickle Baptist Church of Greenville, TX. He loved his Lord, his church, and especially his family. The time spent with his family was what made him the happiest. Preceding him in death were his son, Mike Coke, parents, Hubert Coke and Virginia Coke McCann, sisters Beauthon Hart and Aldine Bartlett, and brothers, H.C. Coke and J.W. Coke; brothers-in- law, Roland Ratliff, Roy Lee, and Bill McGinness; and sisters-in-law, Vera Ratliff and Virginia Ratliff. Surviving him are his wife, Freedia Ratliff Coke; daughters, Debbie Williams (Steve), and Angie McQuay (Kevin); daughter-in-law, Marsha Coke; grandchildren, Matt Williams (Angela), Wes Coke (Jodi), Marty Williams, Elizabeth Peralez (Albert), Nathan Williams, Cody McQuay, and Hannah Wooten; great grandchildren, Eli, Emerson, Easton, Everett, and Kennedy; sister, Axie Bartlett; and, numerous family members and friends. L.B. was born on June 26, 1929 in Smithville, AR. He married the love of his life, Freedia, on December 24, 1950 in Strawberry, AR. He was the first of his family to attend and graduate college from Arkansas State College which is now Arkansas State University. He began his career at Temco in 1953 which is now L3 Technologies and retired almost 40 years later on September 30, 1992. In retirement, he truly enjoyed watching his grandchildren grow up throughout the years participating in sports, choir, fishing/hunting on his property, and any other activity they cherished as he was a very proud Father/Grandfather/Great Grandfather. He did not enjoy shopping with the girls but always looked forward to the golf outings with the guys. Those who knew him well will always remember his smile, and the smiles he gave to others who were around him.
Funerl services will be held 11:00am, Saturday, February 18, 2017 at Peters Funeral Home Chapel, with Brother Roger Ratliff officiating. Interment will follow at Memoryland Memorial Park with Matt Williams, Wes Coke, Marty Williams, Nathan Williams, Albert Peralez, Steve Williams, Kevin McQuay, and Cody McQuay serving as pallbearers. Visitation will be 6:00-8:00 pm, Friday, February 17, at Peters Funeral Home.

To order memorial trees or send flowers to the family in memory of L.B. Coke, please visit our flower store.