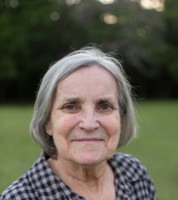 L. Joan Williams Hyatt, age 67, passed away on Monday, July 30, 2018 at the home of her daughter in Greenville, TX. Joan was born September 16, 1950 in Valliant, OK to JR Williams and I. Laverne Wilds Williams. Most of her childhood and young adulthood was spent in Vallejo, CA where she married and had 2 children. When her children were young she moved to Emory, TX with them and she lived there until just a few years before her death. She is survived by; her daughter, Shelby Spears & her husband David; her son, Jesse Hyatt & his wife Holly; grandchildren Allison, Natalie & Morgan Spears and Jude & Hava Hyatt; her brother Johnny Williams & his wife Lois; her sister Paula Harvey; and many nieces & nephews. She was preceded in death by her parents and by her sister, Essie Hodges.

To order memorial trees or send flowers to the family in memory of L. Hyatt, please visit our flower store.