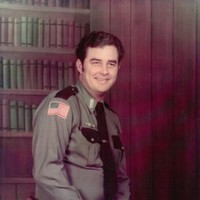 Johnny Fred Richards, Jr., 76, went to be with his lord and Savior Jesus Christ on Sunday morning May, 29, 2016, peacefully at his home surrounded by his family. A memorial service will be 2:00pm Wednesday, June 1, at the Peters Funeral Home Chapel with Rev. David Hammond officiating.

Johnny was born October 14, 1939 to Johnny F. Richards, Sr. and his wife Verona. He graduated from Campbell High School in 1958 where he played basketball and was active in FFA and served various class offices throughout high school. Upon graduation, Johnny joined the United States Army and was stationed overseas serving as Military Police. He also played basketball for the U.S. Army. He married Rebecca Ann Walker December 25, 1958 in Hugo, Oklahoma. Johnny earned his Bachelor of Science in Criminal Justice from East Texas State University in Commerce. He was a police officer and had a long career in law enforcement and later worked in security and as a private investigator. Upon his retirement Johnny enjoyed spending time with his family, his passion for his horses, and he loved anything outdoors.

Memorials may be made in Johnny's name to the National Parkinson Foundation.

Online condolences may be made at here or on our Facebook page.