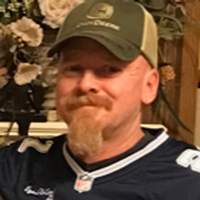 James Clyde Manley a.k.a. Red Beard, formerly of Wolfe City, passed away on March 3, 2019, following a courageous battle with brain cancer; he was lovingly surrounded by his family during his passing. James was born to Clyde and June Manley on December 18, 1961. He married the love of his life, Norma Canales, on November 21, 1991.

James was an exceptionally hard-working man that adored his family, friends, and the Dallas Cowboys. He will forever be carried in our hearts.

Memorial Service will be held at 2:30 PM, March 16th, at Park Street Baptist Church in Greenville, TX. Internment will follow at Tidwell Cemetery on Highway 34. In Lieu of flowers, it is requested that donations be made to St. Jude Children’s Hospital.

To order memorial trees or send flowers to the family in memory of James Manley, please visit our flower store.