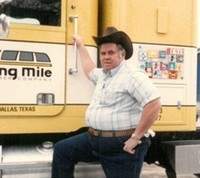 Howard was born in Tyler, Texas on August 10, 1936 and raised by his parents Millie Pratt Lewis and Benjamin Herman Lewis. Howard served in the US Army and fought in the Korean Conflict. He was a truck driver and owner/operator of the Lake Tawakoni Catfish Guide Service. He married Patricia Brennan on July 23, 1955 in Waltham Massachusetts.

Services for Mr. Carry will be 11:00am, Monday, March 13, 2017 at Peters Funeral Home with Brother Jimmy Vaughn officiating. Interment will follow at Weiland Cemetery, with James Carter, Billy Henderson, Blake Taylor, Billy Taylor, Orville Gentry, Allen Ackenback, Damon Carry, and Kerry Karaffa serving as Pallbearers. Visitation will be one hour before service.
To order memorial trees or send flowers to the family in memory of Howard Carry, please visit our flower store.