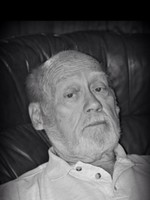 Horace "Pat" Patterson, 79, of Greenville passed away Saturday, January 14, 2017 in Greenville. He was born August 13, 1937 in Kilgore the son of Otis Abner and Fannie Belle (Hughes) Patterson. He married Joy Greer in Kilgore on April 20, 1957. She preceded him in death in 2015. Pat served in the United States Navy and owned Patterson Barber and Beauty Supply. He attended Ridgecrest Baptist Church.

He was also preceded in death by his parents and one sister.

In lieu of flowers donations may be made to St. Jude Children's Research Hospital in Mr. Patterson's honor.


Services will be held Tuesday, January 17, 2017 at 2:00 pm in the Peters Funeral Home Chapel with Earl Lowrey officiating. Interment will be held Wednesday, January 18, 2017 at 10:30 am at DFW National Cemetery with Blake Clark, Terry "TJ" Patterson, Chase Patterson, Cody Nicholson, and Brandon Waldrop serving as pallbearers. Bob Bihr will serve as an honorary pallbearer. Visitation will be at the funeral home Monday, January 16, 2017 from 6:00 pm to 8:00 pm.
To order memorial trees or send flowers to the family in memory of Horace Patterson, please visit our flower store.