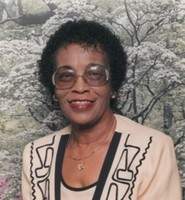 Memorial services for Etta Mae Harris will be held Saturday, January 16, 2016 at noon at Bethel AME Church at 2109 Wesley St., in Greenville with Rev. Rodney Hood officiating. Ms. Harris passed away January 10, 2016 at her residence.

Ms. Etta Mae Harris was born March 27, 1937 to Robert and Luberta Carter. She married Lee Morris Harris, January 17, 1966 in Rockwall, TX. He preceded her in death in 2001. Ms. Harris was a member of Mt. Elem Baptist Church where she served as choir president for many years. She sang in the choir faithfully until the Lord called her home. She retired from Wings Industries where she worked for more than 20 years.

She was also preceded in death by her parents, son, Alvin Veasley, and 5 nephews.

To order memorial trees or send flowers to the family in memory of Etta Harris, please visit our flower store.