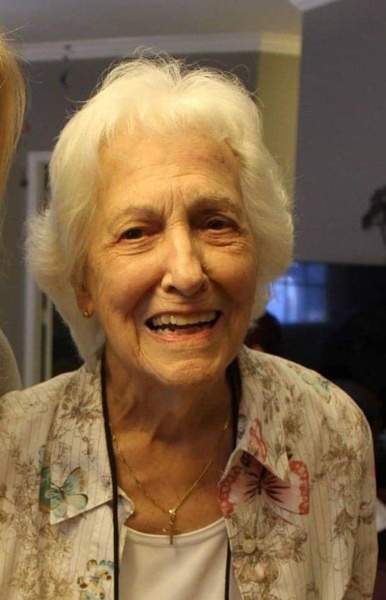 Eleanna arrived on this Earth on August 4, 1923 and left this Earth on October 2, 2020. She had a wonderful 97 years on this Earth. Her early life revolved around her Family-Parents-Dr. James J. Handley and Ava Sory Handley; Brother-James J. Handley Jr. (lost in WWII) Sister-Margaret Jane Handley Malone, all preceded her in death. She is survived by her Daughter Margaret Susan Venus and Life Partner Barbara R. Papke of Centerville, Tx. and Ret. Col. James M. Venus and wife Vuslat Kabadayi Venus of Kyle, Tx. Her Granddaughters Dilara Venus Ozarowski and Husband Alex, Great Grandsons Yakub and Milek, Rumeysa Eleanna Venus and Husband Daniel Davies Hallock of Oregon. Nephew James J. Handley III and wife Pat of Campbell, Niece Gaby Kennard of Australia, Nephews Tom Malone and wife Danna of Lubbock, Donald H. Malone and wife Vickie of Temple, Patrick Malone and wife Patty of Flower Mound, Nephew Thom Venus and wife Margie of Houston, and  many more Great Nieces and Nephews. Eleanna attended Greenville High School, Class of ’40 where she served in the Drum and Bugle Core and one of the first groups of Flaming Flashes. She Attended E.T.S.U. where she was a member of what is now Chi Omega, in her Sr. Yr. she quit to join the War Effort and took a job at the Training Field (Major Field) in Greenville where she met and Married Paul J. Venus of Hattiesburg, Ms. Eleanna was a lifelong resident of Greenville having being born in her family home at 3604 Washington and working at what was Lone Star Gas for 29 yrs.. While in Greenville she was a member of the Greenville Chapters of the D.A.R. and Beta Sigma Phi. She was a Sunday School Teacher and lifelong member of Wesley Methodist Church, a Cub Scout leader and Girl Scout Leader.  Her love of travel began when she would join her father Dr. Handley at his C.C.C. camps in the summers. She and her traveling buddies Mary Caldwell, Jean Harrington and Margaret Upchurch made many trips and her travels extended worldwide when her son was stationed in Europe for several years and she would join him had his family. In her later years she lived with her daughter Susan and her partner Barbara in Centerville and loved sitting on the front porch looking at the animals and watching her Sunsets. She lived her life on this Earth to its greatest extent and always with a smile and grace. She will be Greatly Missed.

If you would like to make donations instead of flowers, you may make the donations to the Audie Murphy/American Cotton Museum.

To order memorial trees or send flowers to the family in memory of Eleanna Venus, please visit our flower store.