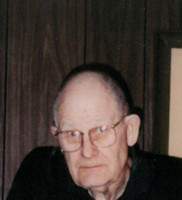 Donovan Hugh Elliott passed away on Saturday, March 14, 2015 in Royse City, Texas. He was born in Winnipeg, Canada on October 29, 1921 to Owen and Alice Elliott. He married Frances Marie Johnson March 18, 1950 in Fort Madison, Iowa. She preceded him in death in 2006. Mr. Elliott retired after 38 years from State Farm Insurance where he worked as an adjuster and had served in the Royal Canadian Airforce. Survivors include: daughters Linda Rascoe and husband Billy of Sulphur Springs and Susan Bowles and husband Brad of Kappa, Il, Son: Steven Elliott and wife Melissa of Garland; Grandchildren Megan Ray, Tyler Rascoe, Elise Rascoe, Steven Elliott, Rachel Elliott, Andrew Johnson and Alyssa Johnson; great-grandchild; Jax Kyle Ray. Along with his wife, he is preceded in death by his parents, brother Bernard Elliott and sister Gwenda Burden.

To order memorial trees or send flowers to the family in memory of Donovan Elliott, please visit our flower store.