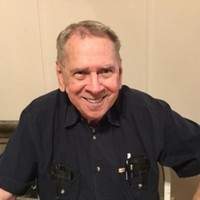 Don W. Broyles, loving husband and father, passed away August 4, 2018 at his home in Greenville. A memorial service will be held at 1:00 pm Saturday, August 11, 2018 at Authentic Life Fellowship in Greenville, with Pastor Jimmy Vaughn and Pastor Keith Cogburn officiating.

Born on June 17, 1937 in St. Louis, Missouri, Don was the son of John F. and Alpha Kelly Broyles. The family moved to Oak Ridge, Tennessee in 1942 where Don attended school before joining the TN Nat'l Guard. He also served in the US Air Force as an Air Policeman, stationed at Laon Air Base, France and Bergstrom AFB, Austin, Texas. After his military service Don worked for the IRS, retiring as a Tax Specialist after more than 35 years. Don married Lynelle Waid on May 31, 1980 in Grand Prairie, TX.

Memorials may be made to The Lion Food Pantry at Texas A&M University-Commerce for students, or the charity of your choice.

To order memorial trees or send flowers to the family in memory of Donald Broyles, please visit our flower store.