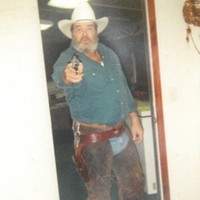 Danny Jack Crumrine, 66, of Ben Franklin passed away Friday, September 1, 2017 in Cooper. He was born on December 24, 1950 in Dallas the son of Walter Burkham and Mary Josephine Gore. He married Carolyn Louise Davis on June 16, 1975 in Dallas.

He was preceded in death by his mother, Josie Burkham; son, Daniel Crumrine; and great granddaughter, Krisleigh Kate.

Funeral service will be held Tuesday, September 5, 2017 at 1:00 p.m. in the Peters Funeral Home Chapel with Bro. Bryce Jester. Interment will follow at Shady Grove Cemetery in Campbell with Brinson Anderson, Trey Davis, Bradley Davis, Dakota Davis, Kolton Earley, Braxton Jack, Duncan Anderson, and Mitch Singleton serving as pallbearers. Visitation will be held one hour prior to the service.

To order memorial trees or send flowers to the family in memory of Danny Crumrine, please visit our flower store.