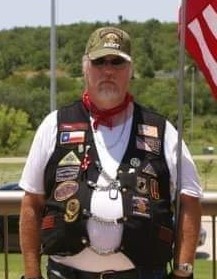 Dale Wayne Lockhart, age 60, of Greenville went home to be with his Lord and Savior on Thursday, December 16, 2021. He was born in Corinth, New York on February 1, 1961 to Donald Grayford Lockhart and Sandra Allison. He enlisted in the Army right out of high school. He was a medic while he served from 1979 to 1981 in Germany. He furthered his medical training to become a licensed vocational nurse for 15 years. In 2009, he became a patriot guard rider, and rode with them faithfully for several years honoring our country’s veterans and their families at their funerals. He dearly loved his country and the men and women that served.

Dale was preceded in death by his father, mother, and several other relatives.

Dale will be laid to rest at the Dallas Fort Worth National Cemetery with full military honors on Monday, January 3, 2022 at 1:30 p.m.

To order memorial trees or send flowers to the family in memory of Dale Lockhart, please visit our flower store.