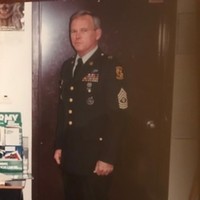 Claudie Mack LaFon of Farmersville, passed away Saturday, March 4, 2017 at his residence.

Claudie Mack LaFon was born in ElMonte, CA on October 7, 1946 to Lee and Flois LaFon. He served in the United States Army. Claudie was married to Darla Newman in August of 1974 in Miami, OK, she preceded him in death in 2014.

Those left to cherish his memory are Linda "Gunn" Cummings, Chris LaFon and wife Jenny, David LaFon and wife April, Patsy Brown, Veda Arneecher, Christian and Corbin. He was preceded in death by Billie Marie LaFon.

A memorial service will be held 2:00 pm Wednesday, March 8, at Peters Funeral Home.
To order memorial trees or send flowers to the family in memory of Claudie LaFon, please visit our flower store.