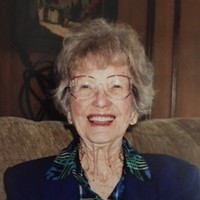 Christine was born Christmas Day, 1910, to Robert Lee Crowell and Evelyn Dowell Crowell in Fate, Texas, Rockwall County, later moving to Burrow community in Hunt County. She graduated Royse City High School and attended East Texas Teachers College in Commerce, Texas. She married Rip Davison on October 26, 1936 and raised her family in Royse City. She went to work for the Malouf Clothing Manufacturing of Dallas, and became the manager for their Royse City facility.

Christine attributed her longevity to raising and preserving most of their own food. Gardening, sewing and taking care of her family were her loves. Lifetime member of the Royse City Church of Christ.

She was preceded in death by her husband, Nolan Ripley (Rip) Davison in 1978. She is survived by 2 sons, Joel, of Royse City, and Danny, and wife Lee, of Bryan. Also 4 grandchildren; Daniel R (Dart) Davison of Cocoa Beach, FL, son Daniel of Lagrange, GA; James and wife Karen Davison and daughter Jaycie Kay Davison all of Gonzales, their son Cole and wife Whitney and Milli of Stephensville; Cynthia Davison Lacy, husband Phillip and son Asa E. of Kerrville, and Justin B. Davison, and wife Renae and son Drew Dash of College Station. Also surviving her are 2 brothers, Robert Crowell and Murphy Leroy (Buck) Crowell both of Royse City, and 1 sister, Leona Mae Strain of Houston. Many nieces and nephews and special friends, Lee Flkes of San Antonio, and Steve Snyder of Dallas.

A celebration of life will be held at a later date.

Special Thanks to her niece Becky, for her care.

To order memorial trees or send flowers to the family in memory of Christine Davison, please visit our flower store.