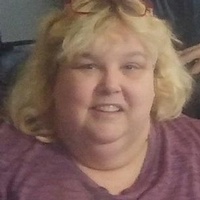 Christina Bellamy passed away Friday, January 25, 2019 in Dallas. Tina was born on May 14, 1972 in West Warick, Rhode Island the daughter of Michael and Anne (Rhodes) Bellamy. She was raised from an early age by her mother and step-father James Skinner. She met Joe Legates on November 15, 2000 in Commerce and they never left each other’s side.

To order memorial trees or send flowers to the family in memory of Christina Bellamy, please visit our flower store.