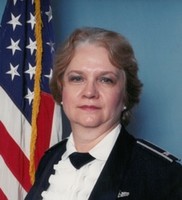 During her 40-plus years working as a registered nurse, Beryl served in the United States Air Force Reserve 31st Aeromedical Evacuation Squadron based at Charleston AFB. As a certified flight nurse, she participated in medevac missions to Viet Nam, Grenada, South Africa, Spain, the Azores, Germany and Panama. Prior to her retirement from the Air Force, she served as squadron commander and had achieved the rank of Colonel. After retirement, Beryl continued her nursing career in Austin, Texas.

A memorial service will be held Sunday, February 14, at 2pm, at Floyd United Methodist Church. Inurnment with military honors will be 3:15pm Tuesday, February 16 at the Dallas-Fort Worth National Cemetery under the direction of Peters Funeral Home in Greenville.

In lieu of flowers a contribution may be made in Beryl's name to Floyd United Methodist Church, 841 FM 36 S, Caddo Mills, TX 75135.

To order memorial trees or send flowers to the family in memory of Beryl Asberry, please visit our flower store.