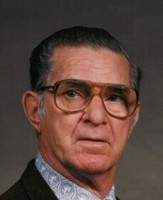 Benjamin Chester Dzierzyk, 92, of Greenville passed away on Wednesday, August 17, 2016 in Greenville, TX. Funeral service will be held on Monday, August 22, at the Saint Williams Catholic Church with Father Paul Weinberger officiating. Burial will be 10:00am Tuesday, August 23, at the DFW National Cemetery. Rosary will be 5:00pm Sunday, August 21, at Peters Funeral Home with visitation to follow until 8:00pm.

Benjamin was born August 24, 1923 in Lorain, OH to George Alex Dzierzyk and Alice Marie Malinowski Dzierzyk. Benjamin proudly served his country in the U.S. Army Air Corps in the Pacific Theater during WWII. On June 19, 1948, he married the love of his life Arlene Mae Roberts in Whiteford, MI. Benjamin retired from Dura Automotive after dedicating thirty years of service. A devoted Catholic and man of faith, Benjamin earned a lifetime achievement award in recognition of his continuous dedication and outstanding service to his community through the Knights of Columbus.

To order memorial trees or send flowers to the family in memory of Benjamin Dzierzyk, please visit our flower store.