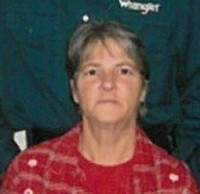 Barbara Sue Harris, 67 passed away on February 10, 2017 surrounded by her loving family in Campbell. She was born on August 10, 1949 in Wolf City and was the sixth eldest of eighteen children born to O. D. and Flossie Elder. Her husband of 47 years, her parents, four brothers, and one sister preceded her in death.

Barbara was born into a big family, and family was the most important thing to her. On December 8, 1966 she married Clarence Alfred Harris. To their union they were blessed with four children. She was a mother, first and foremost, and cherished every moment she spent with her family. She was an excellent cook, made quilts by hand, was a huge wrestling fan, and loved to travel. With her great sense of humor, she always said what she thought and told it like it was. In her house, there was never a dull moment.

The funeral will be held at 2:00 pm on Wednesday, February 15th at the funeral home; burial will follow at Humboldt Cemetery in Campbell. Viewing will be open to the public from 12:00 to 2:00 pm.

To order memorial trees or send flowers to the family in memory of Barbara Harris, please visit our flower store.